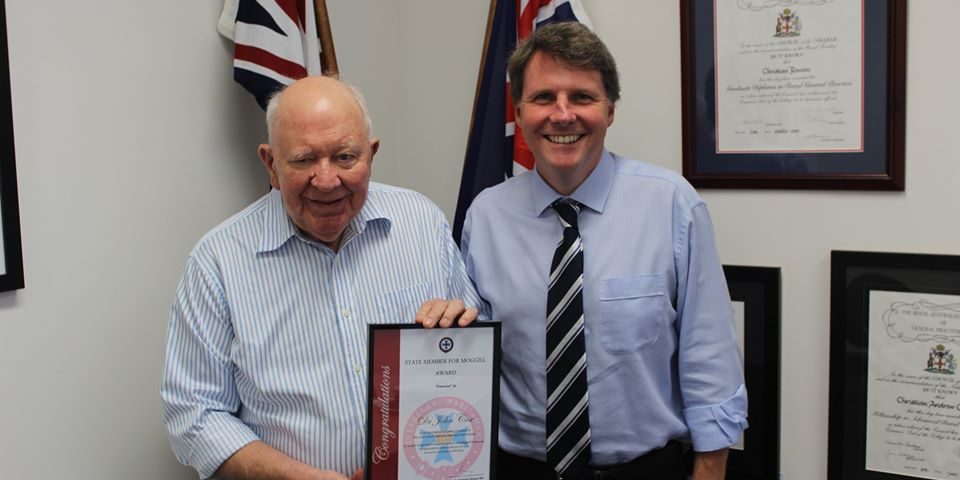 On Thursday the 16th of January, local Bellbowrie resident Dr John Cox was presented with a special award in recognition of more than 55 years of service as a General Practitioner to Brisbane and in particular the western suburbs.

Born and raised in Toowong, Dr Cox entered the medical profession having been inspired by his grandmother, a nurse who migrated from Dublin to Australia at the start of World War I.

After graduating from the University of Queensland in 1964, Dr Cox established his first practice at Westminster Road in Indooroopilly, where he was based for many years between Indooroopilly and Kenmore practices.

It was during this time where Dr Cox was responsible for providing health care across an area that spanned from Auchenflower through to Moggill.

By the 1980s, and after a number of years spent practicing at Ashgrove, Dr Cox established a practice at Bellbowrie, serving the local community until his practice was destroyed during the 2011 floods. After the floods, Dr Cox relocated to Mount Ommaney.

During a special afternoon tea to celebrate Dr Cox’ lifetime of service, Dr Cox reflected on his early days as a GP in the western suburbs of Brisbane.

“I can recall having to do house calls out to the pineapple farm when it was still there, and if I ever got a call to visit Brookfield I would have to think ahead, particularly if it was raining, as the road was not sealed back then.

“It’s been a long career, a very enjoyable career, and I’m amazed at how far both the changes in medicine and the delivery of medicine has come.” Dr Cox said

In presenting Dr Cox with a special community award on behalf of the Moggill Electorate, Dr Christian Rowan MP, the State Member for Moggill, paid tribute to Dr Cox’s service and devotion to residents of the western suburbs.

“It’s a pleasure to formally recognise the contribution and community service of Dr John Cox to the western suburbs of Brisbane.

“As a General Practitioner for over 55 years, including more than 30 years at Bellbowrie, and more recently at Mount Ommaney, Dr Cox has made an enormous contribution to primary care, and the health & wellbeing of many local western suburbs residents.” Dr Rowan said.

After receiving the special community award, Dr Cox wished to acknowledge the local community who he has tirelessly served.

“I would like to thank all my patients who have entrusted me with the care of themselves and their families – some over multiple generations.

“I will be forever grateful to all the people I have met and treated over the years.” Dr Cox said.